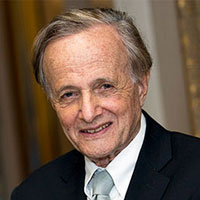 Nanofabrication requires molecular collisions. “Our understanding of such collisions was advanced by the introduction of crossed molecular-beams more than half a century ago. In this classic crossed-beam chemistry the molecular beams were aimed at one another, but the molecules were not” Dr. John Charles Polanyi, said at NanoWorld Boston Conference.

In the past year it has been shown how to go further so as to aim the molecules, rather as one aims the balls in billiards. The trick is to collimate the beam of ‘projectile’ molecules using slits of molecular size. As usual nature got there first; molecules recoiling across a crystalline surface are naturally collimated by the pattern of atoms below.

In this talk Dr. Polanyi demonstrated the growth of this concept allowing Scanning Tunneling Microscopy to reveal collimated surface-molecular-beams of CF2 directed along the rows of copper atoms on single-crystal Cu (110). The CF2 projectiles subsequently struck a fixed chemisorbed’ target’ molecule, e.g. an adsorbed vinyl radical, at a selected impact parameter (selected miss-distance). If the impact parameter was small enough then, and only then, the projectile bound chemically to the target - nanofabrication was under way.

Dr. John Charles Polanyi, (born January 23, 1929, Berlin, Germany), chemist and educator who, with Dudley R. Herschbach and Yuan T. Lee, received the Nobel Prize for Chemistry in 1986 for his contribution to the field of chemical-reaction dynamics.

Born to an expatriate Hungarian family, Dr. Polanyi was reared in England and attended Manchester University (Ph.D., 1952; D.Sc., 1964). He accepted a research position with the National Research Council of Canada in 1952 and began teaching at the University of Toronto in 1956, accepting the title of university professor in 1974.

Dr. Polanyi developed a technique that is known as infrared chemiluminescence based on the observation that molecules, when excited, emit infrared light. By means of spectroscopic analysis of the changes in emitted light that take place during a chemical reaction, he was able to trace the exchange of chemical bonds, thus helping to detail the disposal of excess energy that occurs during the process of chemical reaction.